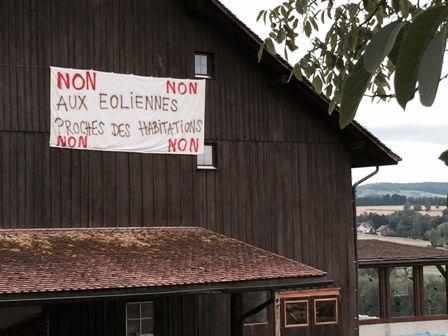 High above Lausanne, in a windy spot in French-speaking Switzerland, some wind turbines are proposed but, as this photo shows, some of the locals are not happy (“No to wind turbines near dwellings,” the banner reads). Their objection is not to the principle of renewable energy – after all, Switzerland is one of the greenest countries when it comes to renewable energy, with about half their electricity coming from hydropower and with a rapidly growing solar industry. The Swiss of course do not have an offshore wind option like the British, so for wind turbines in Switzerland it’s either onshore or not at all.

Wind energy is very attractive in that turbines typically have a 50% load factor versus about 10% for solar; this means that turbines produce about half their theoretical maximum output, which would be generated if the wind was blowing at perfect strength the whole time. Turbines also have the advantage over solar that they work at night time and seasonally their production is greatest in the winter when electricity demand is at its highest.

Protests to turbines seem to spring from two main concerns: visual and aural (noise). Turbines can create noise from their moving parts, but they also make a distinctive sound from the rushing of the air. This is only a problem for houses near to a development, but it can be a real irritation for some people.

Visual objections, on the other hand, can be from almost any distance and some people in the UK have even objected to offshore wind farms on the basis that they spoil their view out to sea. In the UK opinion is very much divided about whether onshore turbines are visually intrusive or not – if you point out the same view of a collection of turbines to two different people, one will say it looks horrendous and the other will pronounce it beautiful. It is very subjective.

In rural Britain, surveys suggest that the majority are positive about the visual impact but the minority who dislike the sight of turbines are much more vociferous. Naturally, policy-makers are most likely to respond to those who feel strongly and shout loudest.

People’s attitude to a wind farm is usually influenced by their involvement. Those who have been consulted from a very early stage are more likely to feel supportive, and those who stand to gain financially are noticeably much more positive than the average.

Financial gain from turbines can come in many forms. Sometimes the developer pays neighbours a fixed sum for supporting a wind development. In other cases it’s a regular small income that they receive. But there are other potential advantages that can be offered to locals: money for community projects or cheaper electricity.